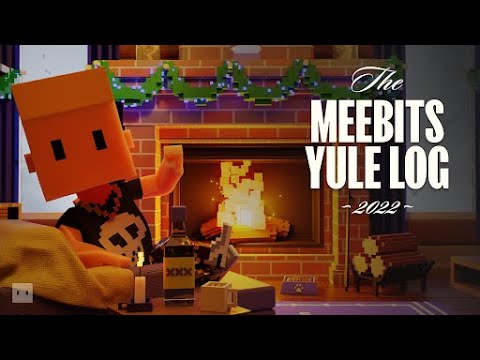 ‘Twas the night before Meebmas, when all through the house,
Not a creature was !meebin, not even a mouse.
The voxels were hung by the chimney with care,
In hopes that a bull run soon would be there.

The degens were nestled all snug in their beds,
While visions of memes danced in their heads.
After a smooch from Mrs. Meeb, she’s off with a wink,
So I settle in my armchair for a stiff drink.

So warm and cozy, I’m ready for bed,
In the distance, I hear the swoosh of a sled.
My eyelids grow heavy, but just as I doze,
I hear a big splat — it sounds pretty close!
Should I open my eyes, go check the snow?
No need, probably just Bugs hitting the window.

I’m almost asleep, when I hear footsteps patter,
I lift up my head to see what’s the matter.
I perk up my ears: did I hear a “ho ho ho?”
No, must be the record, picking up the tempo.
I sit back in my chair to watch the snow fall,
When right from the ceiling, drops a disco ball.

And what to my wondering eyes do appear,
But a moonwalking elephant for reasons unclear,
Busting a move so lively and slick,
I think to myself, this drink hit me quick.
He doesn’t stay long, leaves as fast as he came,
So I recline once more and watch the flickering flame.

I manage to nap, for a short spell,
‘Til I’m awakened by a shout and loud yell.
“Now MB! Now Dangros! Now Tee, Jess, Harwoo!
On, Bailey! On, Runj! Tokenjuggler, you too!”
New reindeer, I wonder, or am I hearing things?
Perhaps this is what too much Discord brings.

So back to the fire, my attention I draw,
Hearing the crackle and watching in awe.
And then, in a twinkling, I hear on the roof
Some prancing and pawing, and was that a woof?

I must see who’s there, so I turn on around,
And changing the record, it’s Jeff Nicholas from WarpSound!
He flips the album, and it starts to spin.
I can’t help but wonder: how’d he get in?

His eyes twinkle, his pixels are merry!
A nose? Not necessary.
His hat atop his head, sitting like a bow,
And the beard on his chin, as lush as the snow;
Now enough about Jeff, I think I made it weird,
But you’ve gotta admit, that’s a great beard.

In a flash he’s gone, so I brush off my question,
And settle right in for a jam session.
I relax in my seat, there’s no need to dwell,
And admire my art, a gift from Marcel.
Another sip of my drink — tomorrow, hair of the dog,
I take a moment to google: what even is a yule log?

I’m lost in thought in the fire’s warm glow,
When a shadow I spot, out the window.
He speaks not a word, but walks on by,
I must be dreaming, I think, or maybe I’m high.
It’s been a strange night — a strange year in fact,
and thanks to our Meeb friends, the joy’s been jam-packed.

The year ahead, who knows what it will bring?
(We do, in fact — and we hope you’ll love everything.)
Thanks for the memes, the support, the Discord delight,
Happy Meebmas to all, and to all a good night!

Is Meebits a blue chip NFT collection ? Deep dive in their story & numbers